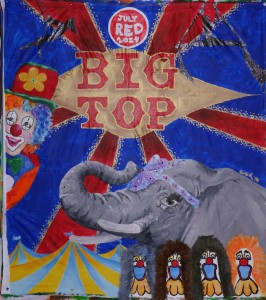 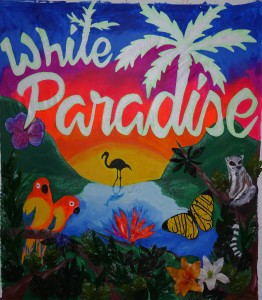 Anticipation has been building since the last car rolled down the hill from Visiting Day.  All week campers have been yelling “WHEN??” and “1-2-3-4 We want color war, ” preparing for their favorite part of camp.  Fake-outs have been plentiful throughout the week.  What started as an ordinary day, finished as one for the record books!   Campers woke up this morning to the sun shining and began their day like any other.

After a regular morning of activities, campers were surprised with a lunch line up.  The cheering began and the suspense built up for an excellent fake-out.  The afternoon started with an amazing Carnival full of cotton candy, sno-cones, dunk tanks, water slides and much much more.  As the campers were enjoying their snack, a plane flew up the valley and  soared over the lake causing the anticipation to grow among the camp.  The plane was flying overhead as everyone cheered and chanted “drop the fliers!” “drop the fliers!”   The plane took off into the distance and left everyone speechless at the fact that another fake-out happened!

The real action happened at the finale of  Catskill Game Night (a take-off of Hollywood Game Night).  The final eight teams battled it out in the mystery picture game.  The final four teams then advanced to the next round.  In the end, the teen girls dominated the competition and won the grand prize!  The girls were then given a chance to upgrade their prize in a bonus round.  In the bonus round, a camper had to identify celebrities by listening to clues given by director Cassie.  With the final celebrity being  Glee star Darren Criss,  time had just run out.   Seconds later, a video popped up on the screen with Darren Criss addressing the camp!  This is where he was proud to announce COLOR WAR 2014—RED BIG TOP vs. WHITE PARADISE!!! Check out the video below!