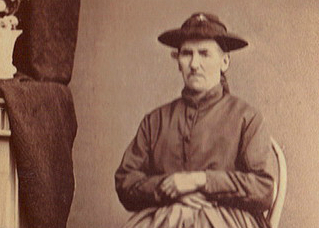 (An unknown grumpy woman, who is in fact not ‘Sober Sue’.)

Some nights, at Timber Lake West, laughter and splashing and splashing and laughter can be heard coming from the pool, which is a sure sign that the evening activity known as ‘Black Hats’ is taking place. Each bunk gets two minutes to make a panel of judges, comprised of the Leadership Team,  sitting on the diving board, laugh with their skits and antics. If one person on the panel laughs, the entire panel goes in the pool, with some spectacular cannonball displays. If the panel does not laugh, the bunk, along with their counselors go in to the chant of “in the pool, in the pool”. Certain staff members, who shall go unnamed, are known to break easily, to the point where someone on the panel will call down to the office to have the giggling offender paged away for a very important phone call!

We would like to thank our former Boys Head Counselor, Roy, for sharing the story of Sober Sue, as we think she would have made a great addition to our Black Hats judges panel!

In the Summer of 1907 a performer named “Sober Sue” began to appear onstage at Hammerstein’s Roof Garden, located above the Victoria Theater in New York City. Sober Sue was billed as the girl who never laughed.

The theater offered a prize of $100 to anyone who could make Sober Sue laugh. People from the audience, as well as professional comedians, all accepted the challenge, and all failed. Sober Sue never so much as cracked a smile. Her routine became extremely popular.

Various theories were advanced to explain Sober Sue’s amazing ability to keep a straight face. Critics theorized that perhaps she was deaf or partially blind. The truth was only revealed after her run at the Roof Garden had finished. It was impossible for her to laugh because her facial muscles were paralyzed. Or, at least, this was the story that circulated.

Long after she stopped performing, Sober Sue’s name continued to be used in show business as a metaphor for a particularly tough audience.  Some reviews of comedies would often claim that the show was so funny “it could make even Sober Sue laugh.”

Click here to read the full article of Sober Sue